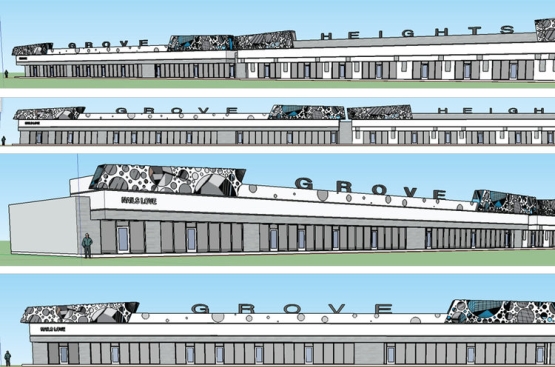 When Braun Enterprises purchased the strip center at 1900 West 18th Street in the Timbergrove/Lazybrook area in the fall of 2016, they branded the center as Grove Heights. Braun’s Zach Wolf told The Leader at the time that it was an underserved retail area and they were in discussion with some new, potential tenants.

The first new tenant, opening next week, will be iLoveKickboxing. The business will occupy a 2,600 square foot space next to Kojak’s Café. According to Dana Kantara, who will own and operate three franchise locations with husband AC, getting into the Heights was a priority.

Eighty percent of the Houston franchise opportunities for iLoveKickboxing were taken – with seven open so far – but remarkably, the Heights was still available. Kantara said that the option for a location in this area was held and released a number of times by other interested parties, but when the last option fell through, the Kantaras were ready to stake their claim.

“After that, the biggest struggle was to find a property,” said Kantara. “We wanted a place where the other tenants made sense and that there was a lot of parking. We liked that [Braun] was renovating this property. We also met Mark [Oster] at Kojak’s and some of the other tenants really liked them.”

Kantara, a former physician’s assistant who also did some outside consultation with clients on health and nutrition, got the “entrepreneurial bug” after joining a iLoveKickboxing in League City where she lives.

“For me, it just made sense,” she said. “I’m following my passion.”

The classes are an hour long. Participants don’t spar with a person, but with a bag. There will be an introductory offer for $20 which includes three workouts and a free set of gloves.

“We want people to come see what we’re about,” said AC Kantara.

Another big get for Grove Heights is Sola Salon Studios which also leases space from Braun Enterprises on West 20th. Sola will take the place of the laundrymat which has vacated the center.

This will be the third Heights location of Sola for franchise owner and Colorado resident John Platten who said that he keeps opening salons because there’s a lot of demand in the area.

“It’s a great location,” Platten said, who noted the space at 5,000 plus square feet will be similar to the size of the 20th Street salon. “We get a lot of stylists who used to work downtown. It’s a big benefit to have a place with free parking.”

In addition to a “super modern look,” the location will have a dedicated room for educators, whether that’s the stylists doing classes for the community or trainers for the stylists.

“We plan to be open by April,” said Platten.

One long time tenant who is excited about all the changes at the center is Mark Oster, owner of Kojak’s Café. The restaurant which now serves breakfast and lunch has proven its popularity with its 17 year tenure in the community.

“It’s a great partnership [with Braun] and the tenants are working together,” said Oster. “Things have changed so dramatically in this neighborhood in the last 17 years. We’re going to try to rebirth our dinner business.”

Wolf said that construction at Grove Heights is almost complete.

“We still have paint and signage to finish which will be done in the next month,” Wolf said.