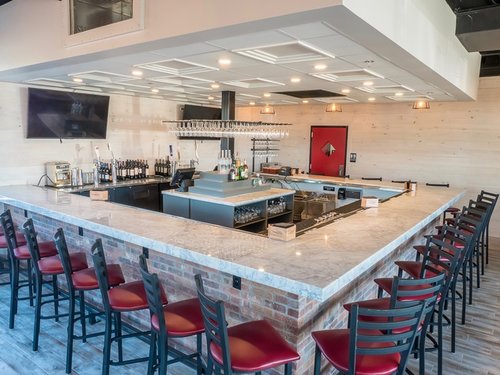 One of Houston’s most popular neighborhood restaurants takes another step forward on Monday when the fourth location of The Union Kitchen opens on Ella Boulevard. Part of the Gr8 Plate Hospitality Group (The Merrill House, Jax’s Grill, The Rollin’ Kitchen), the latest Union Kitchen builds on the company’s reputation for good food, high levels of customer satisfaction, and reasonable prices.

At 5,000 square feet, TUK Ella (as the company calls it), offers seating for over 200 people in the dining room, with another 80 seats on the patio and a 60 person private dining room. As the first location built from a clean space in a renovated shopping plaza, the decor has been upgraded with better finishes like shiplap on the walls and table tops made from reclaimed, 100-year-old oak. Those touches are all part of owner Paul Miller’s plan to make the Union Kitchen a place where as many people as possible want to eat as often as possible.

“People come in, they feel like they’re getting value, they come back. I don’t need to make a ton of money at one restaurant. I want to build the community,” Miller tells CultureMap. Later, he adds, “I want to be the neighborhood restaurant. I want to be able to satisfy that guest who’s getting off, and they want to have a happy hour, they want to take some to-go food back to the family. They can come in for a celebration.”

Even though he’s studied competitors like Plonk and the Garden Oaks location of Liberty Kitchen, Miller says isn’t sure which of his other locations the new outpost will most closely resemble. In Bellaire, the crowd skews younger, with adventurous eaters who embrace ingredients like foie gras when they pop up as specials. In Memorial, the average cost of wines sold is higher ($75 versus $45), and the restaurant sells more steaks.

“This neighborhood, I’m not 100-percent sure yet. We’re doing a funky wine list. We’re changing some things up a little bit. I’ve given Adam Sabir a lot more leeway on bringing stuff in, because he’s very knowledgeable about wine, and I want to see what the community wants,” Miller says.

In addition to wine, craft beer will play a big role at the new location. The restaurant will feature eight taps, including two dedicated to locally-owned Spindletap brewery. Miller says that Spindletap owner Brody Chapman will make regular appearances at the bar to introduce new products and interact with patrons. He also expects to expand on the beer dinners that the restaurant has held with Saint Arnold owner Brock Wagner and others.