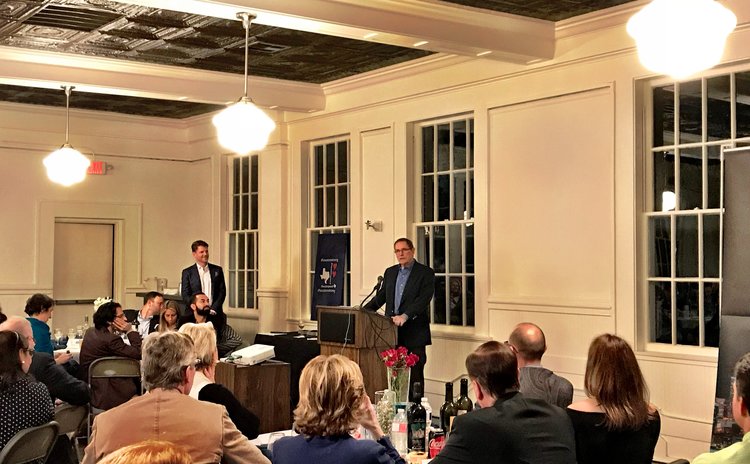 The 44th Annual Volunteer Appreciation Dinner & Community Improvement Awards took place on February 25, 2018 at the Houston Heights City Hall & Fire Station. Emceed by HHA President Bill Baldwin, much of the event was rightfully spent honoring not only current Houston Heights stand-outs but also beloved leaders of past generations. Bill opened the ceremony saying, “We only have such a bright future ahead because of the legwork done in the past by those before us. Our neighborhood is more intact because of these individuals, and we have to work to preserve that.”

In a heartening show of new resident and business engagement, over half the room stood when Bill asked who was attending the event for the very first time. As an example of this re-expansion of Houston Heights fervor, Bill cited that the number of Donovan Park visitors has grown 10 times what it was a decade ago, and he encouraged all to think of themselves as winners for choosing to live, work, and play in this neighborhood. Bill recognized the outstanding efforts of Andrea Hellyerin chairing the event, with the help of Danae Stephenson and Carol Welter. With that, he turned it over to Community Improvement Awards Chair Jason Starr for the presentation of 2017 Community Improvement Awards.

The awards presentation began with the President’s Award. Wearing his HHA President hat, Bill expressed how difficult it was to decide on just one individual to award with so many deserving of recognition before announcing Sharon Dearman as his selection. Sharon was recognized for her phenomenal efforts throughout the last year in steering a redesign of the HHA website, along with a variety of other duties she carries out expertly as VP of Communications. Sharon was quite literally speechless but expressed her surprise and gratitude. Bill also recognized Jim Bennett, Angela DeWree, and Mark Williamson as a deserving and equally indefatigable group of volunteers who contributed enormously to the HHA last year.

Then, for the first time ever, the Visionary Award was presented to Braun Enterprises as the inaugural honoree. The local commercial development firm was awarded for their ongoing and deep investment into Heights retail and dining. Their highly anticipated adaptive reuse of the Heights Waterworks property into a mixed-use center will be their 26th project in the neighborhood, a list that includes several properties along 19th St., 20th St., and Yale. Their first acquisition in the Heights was the building that has long been the home of the Yale Pharmacy, which Braun famously left intact, setting out only to renew the beloved neighborhood business as tenants as long as they wished to stay. Dan Braun accepted the award on behalf of the family-owned business stating his now tried and true development principle of: “If you do something that isn’t what the Heights wants, you’ll likely fail.”