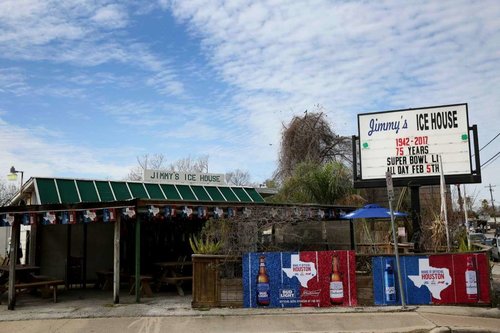 Jimmy’s Ice House, a Heights institution for nearly seven decades, is being sold.

“I don’t know what they’ll do with it,” Quinn said. Potential tenants, as yet unidentified, toured the building mid-January taking various measurements, said manager Audra Audy.

“All things must pass,” said Jimmy’s regular Fred Kitziger. “With all the development around here, this place has had one foot in the grave and the other on a banana peel for several years. But I’m looking forward to seeing what happens.”

Rumors about the sale surfaced in early January, and then an ominous sign appeared behind the bar: “All Tabs Must Be Closed By February 1, and NO NEW TABS.”

Long-time customer reaction is predominately pessimistic. “Sad, sad, sad,” said Marie M., a self-described old-timer whose father was a friend of Jimmie Murray. “I like it the way it is. I don’t want it to change.”

Sherry Griffith, a patron since the late 1950s, declared, “It’s sad because Jimmy’s is an institution. Heights people who’ve moved to other parts of Texas, always come back to Jimmy’s when they visit here.”

Asked how long he’d been coming to Jimmy’s, Andrew Coker joked, “You mean legally?” Coker then speculated, “They’re going to lose their customer base if they change.” A patron who declined to reveal her name said angrily, “I hope they don’t turn it into a… yuppie bar!” Jim Settles bluntly said, “I’ll just find someplace else.”

Even if the new operators make no changes, Quinn said, they won’t be using the names “Jimmy’s Ice House” or “Jimmie’s Place,” business tags that Quinn owns. Also, renovation would be problematic. Due to multiple additions and remodeling across the decades, with numerous “grandfathered” improvements that would now be subject to building codes, most renovation short of demolition could be prohibitively expensive, Quinn said.

Patrons recall from well into the 1990s the unassuming albeit noteworthy qualification on the Jimmie’s sign: “Just Beer.”

“That came from major hassles Frank (Murray) had with the alcohol authorities,” explained customer P.J. McEwan. “He tried to use ‘ice cold beer’ on the sign, but they were such nit-picky jerks about temperature and so forth, he got frustrated and finally settled on ‘just beer.’”

Jimmy’s Ice House T-shirts proclaim, “If you don’t like it here, go somewhere else.” Inside a cover featuring a beautiful fruit-and-cheese platter, the bar’s wine list reads “Red, White, Pink.” Customers enjoy watching and feeding the large turtles living in Gostic Spring, a White Oak Bayou tributary off the property’s west border. The hardiest Jimmy’s patrons brave all weathers on the quiet covered patio out back, sipping beer and addressing the world’s problems.

Bill Wheeler, who walks to Jimmy’s most days, summed up the prevailing sentiments. “I hate what’s happening to the Heights,” he said, “but there’s nothing I can do about it.”