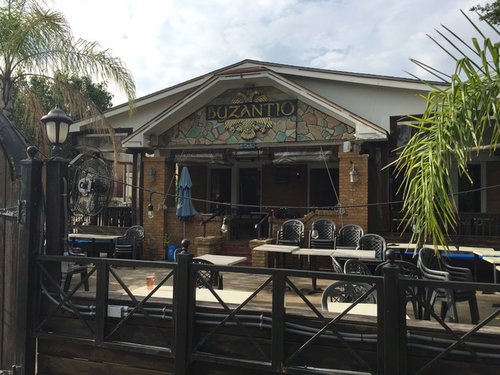 This year has been a rough one for Houston bars and restaurants with a long tenure. In 2016, places that have closed after being in business for 10 years or more include: Mark's American Cuisine, Sparrow Bar + Cookshop (in its role as the successor to t'afia), the original Christian's Tailgate, and 59 Diner. Now, another longtime favorite has joined their ranks.

Montrose Greek restaurant Byzantio announced on Monday that it would cease operations at the end of the day. After a night of 50-percent off food and drinks, it closed.

Open since 2003, the restaurant became known for its spacious patio that provided a serene place for smoking hookah. In addition, some devoted fans considered it Houston's premier destination for classic souvlaki, Greek salad, fries and feta fondue.

Don't expect the space to stay empty for long. Local real estate development firm Braun Enterprises has purchased the property and begun the search for new operators; "Hopefully, someone cool and good for the neighborhood," president Dan Braun writes in an email. The company also purchased Christian's and is developing the space that will soon be home to the first Houston outpost of Gus's World Famous Fried Chicken.