Developer Carves Out a Niche Inside the Loop 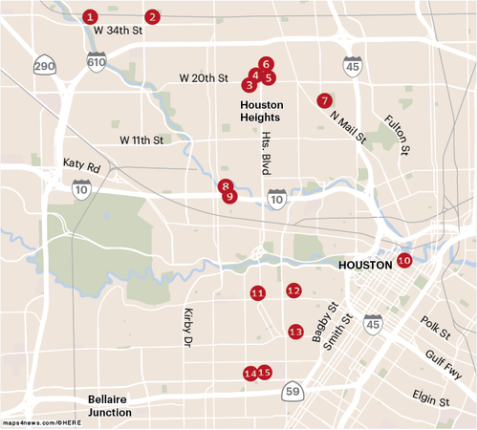 The company behind the transformation of Harold’s in the Heights is on a tear inside and near the Loop, where it has bought more than 15 rundown retail properties. But instead of razing them and developing skyward — which the land costs justify — Braun Enterprises has been repurposing the existing buildings where possible and redeveloping the sites into local-focused retail centers and standalone restaurants.

This wasn’t always the company’s focus. Braun Enterprises was founded in 1979 by Gabriel Braun, and the company cut its teeth buying light industrial and office properties around Houston. Gabriel’s son, Dan, who is now president, weighs in on the company’s strategy.

How did the company get to where it is today?
Prior to 2012, we were opportunistic multitenant office and industrial guys, largely because those were the available properties that were distressed during the downturn. I inherited the industrial buildings because that’s what my dad did. We bought empty offices in highly desirable parts of town and fixed them up.

As things improved, there were far fewer opportunistic buys. After we fixed all of our office buildings, we thought, what is the thing in this tight market that is going to survive? We can’t compete with the big buyers, we’re using our own money and small investors.

So we went and started looking in the Inner Loop and making offers so that we could rehab buildings that people were going to pay land value for and take down. Our objective was to not do — we’ve never done — national brands. We’ve always focused on local tenants, even in office. So we wanted to continue dealing with local restaurants and other businesses.

We did Harold’s in the Heights and 1000 West Gray (now home to Pizaro’s Pizza, Mattress Firm and Nourish Juicebar) and now we are probably on deal 15 or 20 in the Inner Loop. We’ve realized there was this big pent-up demand for Inner Loop retail because most people were buying these buildings and tearing them down.

What drew you to these redevelopment projects?
My dad always said, “Don’t do what everyone else is doing.” We were one of the two or three most active buyers in the downturn. I started with the company in 2003 when we would buy one or two a year max. In 2009, my dad said, “It’s time to buy.” Since 2010, we bought over 40 properties. We went from one a year to 10 a year. We’ve bought six or seven this year. But they’ve shrunk. We used to buy big office buildings, and we have sold most of those.

There’s a lot of demand for retail centers in the Inner Loop. We’re also buying on the highways. We’ve bought two shopping centers on the Katy Freeway in the last six months.

Do you buy with the intention of selling?
Our objective is to keep them. There are untouchable ones — Lucky Burger and Harold’s, we’ve been offered pretty big offers on those, but I don’t think we’d consider selling those.

There are other ones that we’re not married to. In today’s market, the objective is to keep them, but the market drives our decision.

For many developers, the land prices inside the Loop make developing multistory projects a no-brainer. Why not for you?
We’re doing well and we’re profitable, but it’s also about our legacy. Collectively, myself and our team, we all want to do the right thing by the neighborhoods. A lot of times, you have these beautiful older buildings that can be utilized, and if it’s economically viable, we’ll do it.

More importantly, by putting the right tenants in a given neighborhood, we have the ability to enhance the neighborhood. We think about down the road, we want to be a part of something our families can enjoy. To a certain extent, we really do care what people think. We aren’t going out and maxing profits; we do want to make money, but we want to do the right thing within these neighborhoods as well.

This interview has been edited for length and clarity. Read original article here.