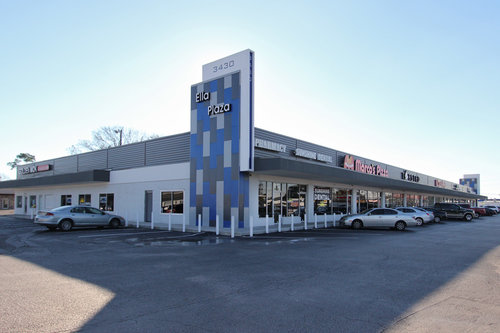 While no one is calling Ella Boulevard north of 610 ‘restaurant row’ just yet, they can’t call it a fast food wasteland for much longer either. No offense Raising Cane’s. With the news of Gatlin’s BBQ’s move from 1221 West 19th Street to a 4,200 space in the new center at 3510 Ella Blvd. – and anticipated opening of the Berry Hill at Ella and 43rd Street by mid-January –  the area has been abuzz with anticipation.

Another person who is familiar with the changing demographics of the neighborhood is Dan Braun with Braun Enterprises. Braun Enterprises acquired Ella Plaza, next to the soon-to-be Gatlin’s last spring, and is getting ready to give the center a major makeover.

Braun said that construction will be complete by the end of the second quarter of 2015. NewQuest Properties is also doing the third party leasing for the new and improved plaza.

“We want to have an identity,” said Braun, who notes that they’ve turned a lot of people down in an effort to acquire tenants that the neighborhood would value.

Although a lot is still in flux, there are two restaurants that have signed leases. Longtime tenant the Golden Wok is staying, but will move to a different location within the center. They’re also rebranding a bit and will continue to offer take out as well as sushi.

The Golden Wok will move spots in the plaza, making way for an anchor restaurant on the corner. Photo by Betsy Denson.

Toasted, a bagel shop/breakfast restaurant owned by a family with over ten years’ experience in the bagel business in Louisiana, is also moving in which will be good news to breakfast lovers in the GOOF. Not signed, but in the works are a take-out pizza place and a “very cool” barbershop with several other locations.

The biggest news will be the tenant on the corner which will take over the spot of the Golden Wok. Braun said they are in talks with four or five different restaurants, several of whom already have an enthusiastic Houston following.

“We want to cater to the neighborhood,” said Braun.