Rumor No More: Ronnie Killen's New Restaurant Will Be Inside The Loop 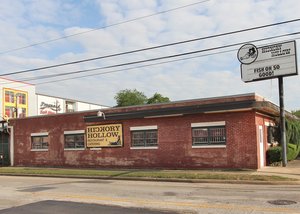 Hickory Hollow may have closed its location at 101 Heights Blvd., but the building that housed the beloved restaurant will continue to serve legendary chicken fried steaks. They’ll just be served by one of Houston’s most acclaimed chefs.

Ronnie Killen, Houston’s king of meat, has leased the property from local real estate developer Braun Enterprises for a new concept he’s simply calling Killen’s. It will be the chef’s first restaurant within the Loop and his second inside the Houston city limits. Over the weekend, Killen floated the possibility of opening in a restaurant in the space on social media; in actuality, he's had his eye on the property for months and completed the deal on Friday.

Unlike his other restaurants, no three letter suffix is required to explain the concept. Instead, Killen’s will consolidate under one roof the Southern-style comfort food that has been present at all of his restaurants in various forms. Whether it’s the fried shrimp that have always been one of the best dishes at Killen’s Steakhouse, the chicken fried steak that’s a favorite on the dinner menu at Killen’s Barbecue, or the brisket enchiladas that are a customer favorite at Killen’s TMX, they’ll all have a home at Killen’s.

Killen says he’s still working on the details. Sides like mac and cheese and the green beans from Killen’s Barbecue are obvious additions. He’s also got memories of eating soul food at a Pearland restaurant called Big Mama’s that served braised pork chops and dirty rice; he thinks he could put his spin on those dishes, too. Specials like meatloaf and versions of Killen’s staples like pork belly will also be included.

Two other aspects Killen says he still has to figure out are presentation style and price point. He says he’s intrigued by a restaurant like Husk, the acclaimed Southern restaurants founded by James Beard Award winner Sean Brock. Those establishments serve a more affordable menu at lunch and a more elevated, slightly more expensive range of offerings at dinner. In terms of presentation, the luxurious Frette tablecloths will probably stay at STQ — that's too upscale — but bread pudding served in Staub cast iron is definitely on the table.

“It’s going to be my style of food. I’m not a fancy frou-frou chef,” Killen says. “‘Looks great’ gets you a first run. Then when you taste it, that’s why people reorder it.”

When the restaurant will open is also still uncertain. Technically, Killen’s contract with Braun gives him three weeks to inspect the building and walk away if it doesn’t meet his standards, but he doesn’t expect to find anything that would trigger that option. After all, Hickory Hollow only closed in January. Depending on the timing required to receive permits, Killen's could open in as little as four months.

Changes will be fairly straightforward: new paint, new floors, reconfiguring the restrooms for better flow, and opening up the kitchen (a Killen’s design signature). He’ll swap out the restaurant’s current barbecue pit for a newer model. With construction complete on the new Killen’s Steakhouse in The Woodlands, his contractor is ready to begin work as soon as possible.

“We should be able to do what we need to do with what they’re giving us [in ‘tenant improvement’ funds],” Killen says. “They gave us the option to purchase [the building]. That’s what took us a long time to get it in the lease. They’re excited to have us there, and with how many other locations they have, it’ll be a good relationship with them.”

The feeling is mutual, according to Braun leasing director Zach Wolf. “We are thrilled to be bringing Ronnie Killen to the inner loop,” he says. “Hickory Hollow was an institution for 40 years, and we know Killen’s will continue that tradition.”

Continue the tradition? Given his reputation, he might even improve on it a bit.