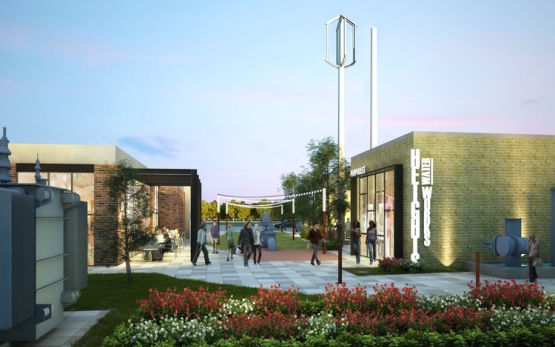 Braun Enterprises plans to redevelop the historic Heights waterworks, a city-owned property on 19th Street, into a collection of restaurants in the neighborhood near downtown.

The Houston-based company is under contract to acquire the site from Alliance Residential in late September, according to Zach Wolf, director of leasing for Braun Enterprises. It will purchase the property, which sits on 2.1 acres at the northeast corner of 19th and Nicholson, from the Phoenix-based apartment developer.

Alliance Residential is buying two catty-corner lots along Nicholson at West 20th streets from the city of Houston, and will in turn sell the lot with the waterworks buildings to Braun Enterprises.

"This is our 25th project in the Heights area," Braun Enterprises president Dan Braun said in an email.

"Our intent is to embrace the walkability and help continue to connect Yale to Shepherd along 19th Street," he said, adding that 19th "has always been the bull's-eye in the Heights for retail and by adding four freestanding restaurants, we hope to make this an area for the community to gather in the Heights."

The waterworks include a 1928 concrete and brick reservoir building recorded in the National Register of Historic Places; an Art Deco pumping station from 1939; and a pump building constructed in 1949. A proposed building along 19th Street would add 5,000 square feet to the project, which is being designed by Jerry Tipps and Jared Tipps of Tipps Architecture.

"We are incorporating a considerable amount of greenery and outdoor space to make it very pedestrian friendly," Wolf said.

"The Heights Hike and Bike Trail runs adjacent to the western side of our property, and we expect to generate considerable pedestrian traffic off of the trail."

Braun Enterprises' area developments have attracted tenants such as Harold's Restaurant, Bar & Terrace and Torchy's Tacos at nearby Harold's in the Heights, Mellow Mushroom at 1919 N. Shepherd and Bernie's Burger Bus at 2200 Yale.

The site is directly across from another potential redevelopment site. Earlier this year, JPMorgan Chase Bank put its two-story bank building and land on the market. It is reserving a portion as the site for a new modern building. Just north of that, Alliance Residential plans to develop a Broadstone apartment midrise.

Braun Enterprises would begin work as soon as the property purchase is final, with completion targeted in the second quarter, according to Wolf, who anticipates plenty of interest from both national and local restaurants.

The street, Wolf said, is "where everyone wants to be. There just hasn't been any space available."