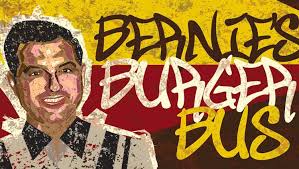 Owner Justin Turner, who told Houston Business Journal in August that he was looking for a spot for a third location, announced on Instagram on Oct. 15 that he had signed a deal to lease 2200 Yale St.

The property at the corner of 22nd and Yale is owned by Braun Enterprises and will be redeveloped into retail and restaurant space.

In August, the blog Not Of It reported an Edge Realty Partners site plan that showed a Bernie's Burger Bus location planned for the space. But at the time, Turner said he was still considering locations in the Heights and other parts of town.

In his Instagram post, Turner said that the Heights location will be open in the summer of 2016.

He also added that the burger joint's Katy location in LaCenterra at Cinco Ranchis a few weeks away from opening. The project was originally slated to be completed in September.

The Heights location will be the food truck's third brick-and-mortar location, and its first inside the 610 Loop. Turner opened his first Bernie's restaurant last summer at 5407 Bellaire Blvd.

Meanwhile, Bernie's remains strong on the food-truck front. The bus earned the top spot for a Houston food truck on the Daily Meals' annual list of the 101 Best Food Trucks in America again this year.